← more from
Mello Music Group
Get fresh music recommendations delivered to your inbox every Friday.
We've updated our Terms of Use. You can review the changes here.

Complicate Your Life With Violence 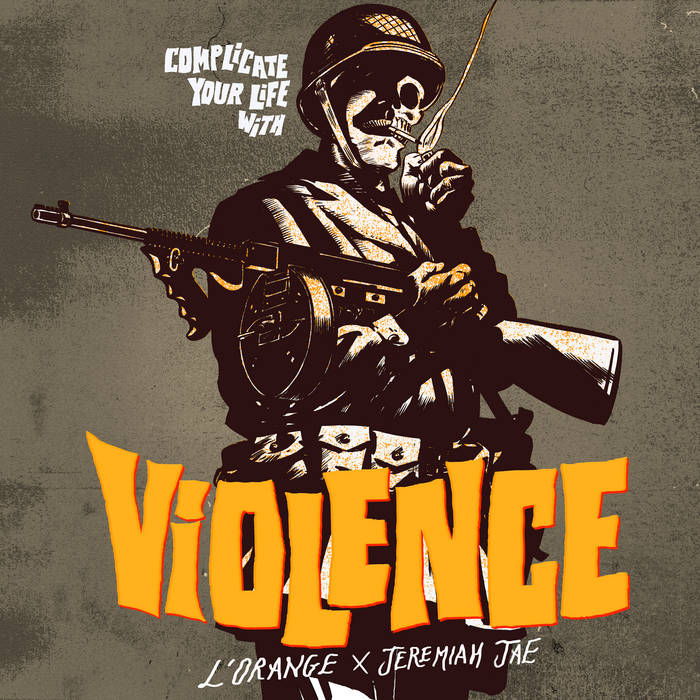 danksfavorites This entire project I consider a masterpiece on par with Madvillainy. This only edges out for top spot because I don't ever skip a single track! Amazing collab with two cats who have a solid chemistry and dynamic that works magically. Favorite track: Ghost Town.

Zakk R Such a good album! Can we get the instrumentals??? Favorite track: Devil's Piano.

Moskeelove It’s very interesting, unique, provocative, flows are deep and relevant and the tracks are hot!

Complicate Your Life with Violence answers eternal questions with an assassin’s bluntness: when do you fight and when do you flee, what does sanity look like in a sick world, how does one retain valor among the corrupt, and why does the union of one producer and one MC always yield the best music?

The complex anti-heroes at the center of this blood hailstorm are Jeremiah Jae and L’Orange -- the Chicago fracture rap demigod and the sampledelic North Carolina cubist. Sequels are usually fated to be repetitive: a ceaseless treadmill of repeated jokes and concepts. So for their sophomore effort on Mello Music Group, Jae and L’Orange went full True Detective, transporting their existential outlaws into an entirely novel universe.

Their debut, The Night Took Us In Like Family was a seedy shadowland that subverted the tropes of film noir. It was hailed by Pitchfork as a “seamless pairing,” while Okayplayer raved about its ability to conjure dark and treacherous vibes. But this is Marlowe meets Mad Max, where Jae’s furtive hero staggers through a futuristic dystopia that feels vaguely familiar. A landscape whose kill-or-be-killed binary is best summed up by the koan: “Nobody feels like a hero with a machine gun popping off at him.”

Over the course of this decade, L’Orange has become a master of weaving chimerical narratives through chopped up fragments of vintage films. If he originally slanted towards player piano jazz and old detective B-movies, he’s become adept at summoning any mood: afro-futurist space orbits and carnival whimsy, rain-slicked melancholy and straight up guard-your-grill boom-bap. With his latest slab, he incorporates nearly all of his sides -- creating something that feels somewhere between a Spaghetti Western on 25th Century Mars, Bogart starring in Blade Runner and a rap soundtrack to a Steve McQueen jailbreak film.

Since his early days on Flying Lotus’ Brainfeeder imprint, Jae has staked his sterling reputation on abstract poetics and caustic bars, wreathed in fog, static and high voltage. Yet this might be his finest performance. He inhabits the role of a man trying to escape a life of crime who gets caught and conscripted into an army. The historical setting of the record -- told through interspersed cinematic vignettes -- is used as a backdrop to examine the character’s perspective and the “war” that’s happening in his own mind.

The records were approached like an actor working on a film: with the artists researching, finding inspiration in books, film, and music. L’Orange even buzzed his hair and simulated a soldier’s workout routine to get into a zone during the writing and recording process. The result is suitably transformative.

On “Behavior Report,” Jae tells his loved ones that he’ll be back before the break of dawn while L’Orange creates a whirlwind of eerie instrumentation that leaves listeners feeling like the War of the Worlds is about to break out. “Say It” is a warped trick mirror nightmare, a call and response to the griots and ghosts of antiquity. “Dead Battery” combines filthy murder mystery basslines and concussive drums to Jae unfolding the stories of titans clashing. While “My Everything Is Bulletproof” finds the rapper interpolating old Puff Daddy verses to invoke dystopian scenarios of martial enemies lying in wake, the feeling of constant encroaching fear, and allusions to Behold A Pale White Horse. While L’Orange filters Sergio Leone through Madlib. The pair are backed by brilliant turns from the most enigmatic geniuses of the modern underground: Chester Watson, billy woods, Zeroh and Lojii.

The end result is something that fits few analogies: a record that exists in the warped dust of history but feels innately relevant to the schizophrenia of modern existence. It’s Jeremiah Jae and L’Orange on a great escape, finding no concrete answers but asking all the right questions -- a masterpiece that can be interpreted in a dozen different ways, glimpsed through a gun smoke haze, hard boiled but blood simple.

All Songs Produced by L'Orange
All Songs Written by Jeremiah Jae